Hello everyone, I hope all is well with you. I’m back today and I thought I’d share with you two books I’ve recently read. After a couple of serious posts, I thought I’d lighten things up with a fun one. Well, fun to us bookworms!

The first book is “The Girl in the Blue Coat.”  It’s the story about friendship and betrayal during WWII when everyone was living in fear.  One woman hides a Jewish girl in her back room and one day the girl disappears.  She seeks out the assistance of Hanneke to find this girl and so the story begins.  Hanneke is pulled into the situation and reluctantly does what she can to find the girl. 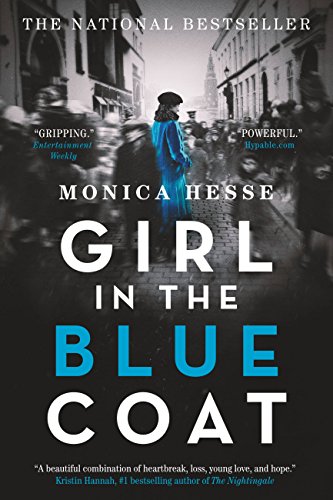 Amsterdam, 1943. Hanneke spends her days procuring and delivering sought-after black market goods to paying customers, her nights hiding the true nature of her work from her concerned parents, and every waking moment mourning her boyfriend, who was killed on the Dutch front lines when the Germans invaded. She likes to think of her illegal work as a small act of rebellion.
On a routine delivery, a client asks Hanneke for help. Expecting to hear that Mrs. Janssen wants meat or kerosene, Hanneke is shocked by the older woman’s frantic plea to find a person-a Jewish teenager Mrs. Janssen had been hiding, who has vanished without a trace from a secret room. Hanneke initially wants nothing to do with such dangerous work, but is ultimately drawn into a web of mysteries and stunning revelations that lead her into the heart of the resistance, open her eyes to the horrors of the Nazi war machine, and compel her to take desperate action.
Beautifully written, intricately plotted, and meticulously researched, Girl in the Blue Coat is an extraordinary, gripping novel about bravery, grief, and love in impossible times.
My Thoughts:

This story was well written and an accurate portrayal of what happened during WWII. I loved Hanneke, she was such a strong girl, even though she didn’t see herself that way. There’s a twist at the end that took me by surprise. A well written historical YA novel. I’d recommend this to both adults and young adults. It was a great read.

The next book I read is also a WWII novel and it’s based on a true story. The title is “Beneath a Scarlet Sky.” It’s the story of Pino and his family during WWII and how Pino helps the resistance by joining the Nazi army. It’s a depiction of the bravery of the Italian people who joined the resistance and helped Jewish families escape into Switzerland. 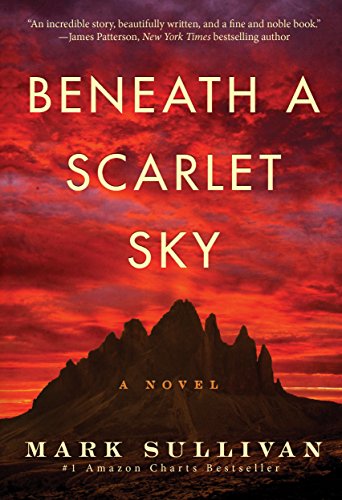 Soon to be a major television event from Pascal Pictures, starring Tom Holland.

Based on the true story of a forgotten hero, the #1 Amazon Charts bestseller Beneath a Scarlet Sky is the triumphant, epic tale of one young man’s incredible courage and resilience during one of history’s darkest hours.

Pino Lella wants nothing to do with the war or the Nazis. He’s a normal Italian teenager—obsessed with music, food, and girls—but his days of innocence are numbered. When his family home in Milan is destroyed by Allied bombs, Pino joins an underground railroad helping Jews escape over the Alps, and falls for Anna, a beautiful widow six years his senior.

In an attempt to protect him, Pino’s parents force him to enlist as a German soldier—a move they think will keep him out of combat. But after Pino is injured, he is recruited at the tender age of eighteen to become the personal driver for Adolf Hitler’s left hand in Italy, General Hans Leyers, one of the Third Reich’s most mysterious and powerful commanders.

Now, with the opportunity to spy for the Allies inside the German High Command, Pino endures the horrors of the war and the Nazi occupation by fighting in secret, his courage bolstered by his love for Anna and for the life he dreams they will one day share.

Fans of All the Light We Cannot See, The Nightingale, and Unbroken will enjoy this riveting saga of history, suspense, and love.

While this is the story about the bravery of the Italians who joined the resistance, it’s also the story of love and loss. The story of Pino and Anna. Pino falls for her hard after he joins the Nazi party and begins spying for the resistance. The war ends and Pino believes he and Anna can now marry and start a family. However, Pino suffers the devastating loss of his love at the very end of the war. It’s incredibly sad and frustrating because he feels incredible guilt that he did not save her.  This is an incredible story and the bravery of the Italians involved in the resistance illustrates that good does triumph over evil. I’d recommend this book to both adults and young adults alike.

Thanks for stopping by and reading my post. Do you have any books you’d recommend? Leave a comment. I’d love to hear from you!

17 thoughts on “What I’ve been Reading”