This always inspires me so I thought I’d share it with all you Warriors out there! 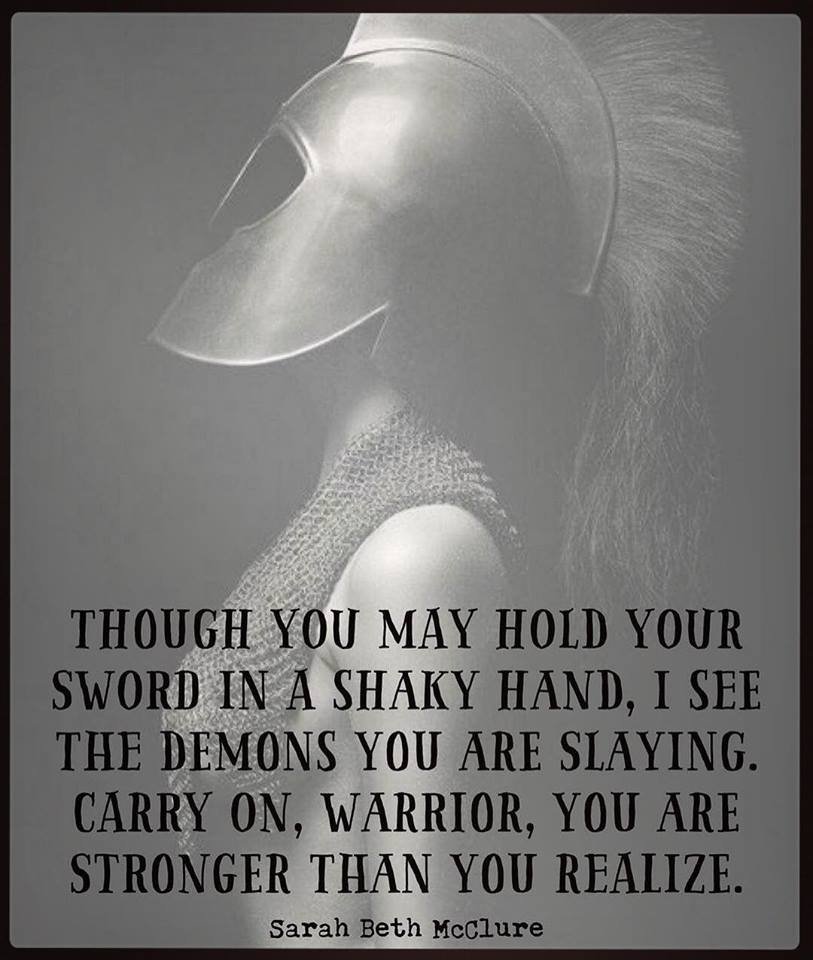 Hello everyone, I hope all is well with you.  I saw this quote on Facebook a while ago and I thought I’d share it with all of you. I hope you have a great weekend. I’ll be back soon with a post. 🙂

“The sagely person is like water
Water benefits All things and does not compete with them.
It gathers in unpopular places.
In this it is like the Tao.
In dwelling, live close to the Earth.
In thinking, be open to new ideas.
In relationships, be kind.
In speech, tell the truth and keep your word.
In leading people, demonstrate integrity.
In daily matters, be competent.
In acting, consider the appropriate timing.
If you do not try to prove yourself superior to others,
You will be beyond reproach.”

Hello Everyone! I hope all is well with you! Today I’m participating in Sweet Saturday Samples. I haven’t participated in a while because I’ve been busy with the kiddos. So, I thought I’d share the first book in the Super Spies series, “The Super Spies and the Cat Lady Killer”.  I’ve found that tweens and teens enjoy the story. It’s been well received by girls between the ages of 8 to 16. Enjoy the excerpt and thanks for stopping by!

The house sat hunkered down as if it were tensed to spring like a cat stalking a mouse. Sarah shuddered at the thought of going up on the porch and she chewed on her thumbnail.

Looking behind her, Sarah studied the church facing the Cat Lady’s home. It was a strong structure built of huge stones. She could tell it was as old as the town itself and its presence made her feel safe. Motioning for Jackie and Lacey to follow her, she moved from the sidewalk to the huge oak tree growing on the church’s lawn. The girls hid behind it, peeking out at the witch’s home.

“Are you still going to do it?” Jackie teased.

“Do you think she’s inside?” Lacey asked wide-eyed.

Sarah smirked at her. “Where else would she be? I hear she never leaves her house.”

“What are you waiting for? Are you afraid of the witch?” Lacey asked as she stared at the house.

“Well, if she’s not …then what are you waiting for?” Jackie snickered.

“I just want to make sure the coast is clear.”

“Hey, you guys, look at all the cats,” Lacey whispered. She pointed at the clusters of felines lolling about on the porch and walking in the yard. “There has to be at least twenty of them.”

“Yeah, that’s why she’s called the Cat Lady.” Sarah rolled her eyes and then felt the sting from Jackie’s slap.

“Do you think she put a spell on those cats?” Lacey asked with a wide-eyed expression, twirling her hair with her finger.

“Could be,” Sarah snickered. “Or maybe she just…you know…gives them food.”

“Knock it off, Sarah,” Lacey glared at her sister.

Sarah stuck her tongue out at her. “Okay, I’m going for it. I’ll meet you back here.”

“Cool beans? Is this town still in the nineties?” Sarah teased.

“This is physical abuse.” Sarah rubbed her arm, trying to appear injured.

Jackie laughed. “Be thankful I like hanging out with you.”

“All I have to do is ring her doorbell, right?” Sarah poked her head out from behind the tree. She noticed the tomato pulp still clinging to the siding and peered up and down the street for the notorious Wykowski boys.

Sarah took a deep breath and sprinted across the street. She stopped at the porch stairs. A group of cats were sunning themselves on the steps—they meowed at her as if they were hungry. Jumping when one of them rubbed against her legs, she bent down and stroked its back, never taking her eyes off of the house.

Sarah petted the cat, while she worked up the courage to climb the stairs. She heard the loud purr of the contented feline and it eased her anxiety. All of a sudden, she felt a hand squeeze her arm. Her heart leapt in her chest and she let out a yelp.

Turning, she spied Jackie. “I almost peed my pants!”

“What are you doing here?” Sarah muttered and gave Jackie the evil eye.

“I couldn’t stay behind the tree and miss all the action.”

Sarah glanced around her and pointed to some overgrown bushes in front of the porch. “You can hide over there.”

Out of the corner of her eye, Sarah spied her sister running toward them and stifled a groan.

“I didn’t want to stand by myself,” Lacey whimpered, slightly out of breath. She tugged nervously on the hem of her T-shirt as she eyed the house.

Sarah groaned and her shoulders slumped as if she carried a heavy burden. She sighed and pointed at the bushes again. “You hide over there with Jackie and be quiet.”

Sarah waited until the other girls were out of sight, and then climbed the stairs. Stopping when she reached the porch, Sarah took some deep breaths before stepping onto the sagging stoop. Stepping gingerly, she hoped the porch would support her.  Her stomach clenched when it groaned. She took another step and then another, the porch complaining with every footfall. Halfway across the stoop, she heard the girls behind the bushes.

“She’s almost to the door.” Lacey said in a low voice.

Sarah bit her lip, stifling the disapproving remark dancing on the tip of her tongue. Instead, she turned and glared at the bushes, willing its occupants to shut up. She made eye contact with Jackie, who quickly ducked behind the shrubs, pulling Lacey with her.

What in the world is she doing?” Lacey asked.

Sarah shook her head and continued her journey. She felt Jackie and Lacey watching her as she crept toward the door. Reaching the entryway, she was surprised to find the storm door wide open. The only barrier between the Cat Lady and the rest of the world was a flimsy screen door hanging askew on its hinges.

Alarm bells rang in Sarah’s head—this has got to be out of character for someone who never leaves their home. She turned back and whispered to the other girls. “Hey!”

Jackie poked her head out. “What?”

Sarah shrugged and pushed the doorbell. It let out an irritating buzz and she had the feeling it had been broken long ago and never fixed. She dashed down the stairs.  The cats scattered, alarmed by the sudden activity. Reaching the shrubs, Sarah hid with her sister and Jackie.

Gasping for breath, Sarah waited for a reaction from the old woman. Her heart pummeled her ribs and she pressed her hand to her chest to calm it.

After a few minutes, Sarah started to pace. “Well…nothing’s happened.” She peeked out from behind the shrub and saw the screen door hanging ajar. “I bet she’s not even home. I’m going to try again.”

Sarah shook her head, and then peered out from behind the shrubs. Once again, she climbed the stairs. She was braver this time and it didn’t take her as long to make it to the door.

She looked inside, her heart lurching in her chest. She tiptoed to the picture window and peered through it. Gasping, she ran back to the entryway. Pulling it open, she lunged inside.

Sarah stared, unable to tear herself away.  Shock ran through her body like an electrical current as she eyed the scene before her. The crumpled form of the Cat Lady lay on the living room floor, just inside the door. No life flickered in the old woman’s staring eyes. Her mouth gaped open in a silent scream and her hands were up around her head as if she were warding off blows. Turning away, Sarah gagged as the coppery scent of blood assaulted her. There was blood splattered everywhere, on the wall, on the carpet and under the Cat Lady’s body.

Suddenly, Sarah’s throat constricted and she gasped for breath. Fearing she would faint, she stumbled back out the door and collided with Jackie and Lacey on the porch.

Jackie grabbed Sarah’s arm and shook her. “What are you doing? Are you crazy? I never said to go inside!”

Jackie shook her again. “Are you under the Cat Lady’s spell?”

“She’s under the Cat Lady’s spell,” Jackie said waving her hand in front of Sarah’s eyes.

“What is it?” Jackie shook her again. “Speak…say something!”

If you’d like to purchase this book for any of your teens the buy links are below and it’s also available as an audio book! 🙂

Thanks for stopping by and there’s more samples to check out here!