Hello everyone. I hope all is well with you. Today is the anniversary of the horrific day in our history of the Nine Eleven terrorist attack. Do you know where you were when you first learned about it? 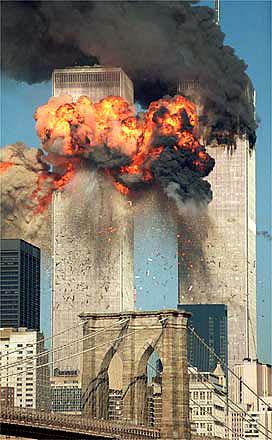 I know where I was. I was driving to work, listening to the radio. The song ended and the announcer spoke and told everyone a plane had collided with the North Tower. Then at 9:03 AM the South Tower was hit.

I arrived at work to find that many of my co-workers didn’t know what was going on, but it wasn’t long before the word spread through the building.  I remember calling the guy I was dating at the time and telling him about the situation. I remember our conversation and the way he told me he had to go because his boss was making some kind of announcement. I remember what I was wearing that day. I think that’s kind of weird, but hey what can I say.

It seems like yesterday, but it was fifteen years ago.

I watched a documentary about Nine Eleven last night and it was very well done. I would recommend watching it. It’s titled, “Fifteen Septembers Later.” Click the link to check it out.

I loved how in the time of a crisis people of this country pulled together.  For example,  after the attacks, many New Yorkers were stranded in Manhattan. A band of boats came together and rescued nearly 500,000 residents of the city. This was the biggest boatlift in the history of the United States.  There’s a documentary about it. Click the link to watch.

Ordinary men and women became heroes that day. It was amazing how everyone pulled together, forgot their petty prejudices, and helped each other out. It’s too bad it took a tragedy to pull them together.

New Yorkers weren’t the only heroes that day. After the second plane hit the South Tower, the US cancelled all flights and closed airports. Flights had to be diverted and that’s when our awesome Canadian neighbors allowed planes to land in their airports. The town of Gander took people into their homes, providing shelter and food. What an incredible thing to do. It warms my heart to see such an outpouring of generosity and love. It makes me think there’s hope for the human race after all. 🙂

Thanks for stopping by and reading my post. I wanted to recognize the heroic people of Nine Eleven in some way and my blog was the logical place for me to do it. If you’d like to share your thoughts on Nine Eleven, leave a comment. I ‘d love to hear from you.

Hello Everyone! I hope all is well with you today! It’s November’s Tween Meme today and I thought I’d touch on a topic I discussed earlier this year.   That topic is Volunteering.

The Tween and Teen years are filled with new challenges and new emotions. It’s the first time our young people are testing their boundaries, which makes these years exciting and frightening at the same time.

So, it’s not surprising that they make some incorrect choices. 🙂 In the past, I’ve said that parental involvement and keeping kids active in sports are ways to combat some of these negative choices. I still believe that parental involvement is very important in developing positive behaviors, but what about the kids who aren’t interested in sports? Some kids just don’t have any inclination in that direction.

Well, I’ve thought about this and I’ve discovered a solution. 🙂  That solution is volunteering. That’s right. I came across a wonderful organization that encourages young people to volunteer and I’m very impressed by it.

In fact, I’m working with them on a project and I’m very excited about it! But, there will be a whole blog post about that as soon as we get all the details ironed out. 🙂  So stay tuned for that. 🙂 The organization is called VOLUNTEENATION and here’s the link to their website. Check it out! http://www.volunteennation.org/.  This is a national organization which means they have volunteer opportunities all throughout the United States.

I’m sure you all have heard one of the best ways to combat depression is by helping others…I believe this applies to tweens/teens as well and that’s what volunteering is all about.

What I love about this organization is that young people are working with other students that are the same age. They aren’t at home closed off in their rooms brooding about their problems. Volunteering takes their focus off of their issues and gets them moving in a positive direction.  In my opinion, this could lead to more fulfilling friendships because they’re working together toward a common goal.

Another positive effect this type of organization has is that there are certainly instances where young people can utilize/learn leadership skills as well as team building skills. This expertise is necessary for the working environment.

Maybe if we got our kids involved in volunteering we’d have fewer disasters like Columbine and Newtown.  Food for thought, wouldn’t you say?

I can’t say enough about this organization; it’s getting our young people headed in the right direction.

Thanks for reading my post today! I’d love to hear your thoughts! Please leave a comment and let me know what you think! 🙂

Hello Everyone, I hope all is well with you! Today’s post is going to be a short one because I’m getting ready for the Reading Rocks in Rockford Festival this Saturday.

I’m really excited about this because I’m going to be conducting one of my Mystery Writing Workshops that day. So stop on down and check it out!  Information on the Festival is below! I hope to see you there!