Hello everyone. I hope all is well with you. I’m back today and I’m talking about the book and the Netflix series “Thirteen Reasons Why.” This week our school sent us a letter regarding the content of this show. They were concerned about how teens might be reacting to the strong issues the show addresses. 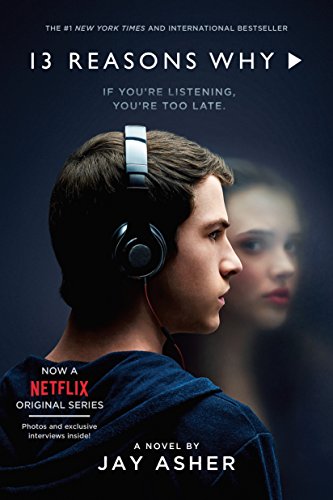 Now, I haven’t read the book or watched the series. I’ve got to find a time when my boys aren’t around to watch it, and right now they’re around a lot. I like that. 🙂 So I’m willing to make the sacrifice.

I agree with the concerns of the school district. The book and the show deal with a lot of teen issues like rape, slut-shaming, and suicide. The letter I received voiced the concern that the issues the show addressed might be possible triggers for some teens who are struggling with these problems themselves.

The school did a great service to bring these concerns to the attention of the parents. I was impressed the district was so in tune with what is happening among the student body. I work in the library and I know that book has been very popular.

So the question arises, who is responsible for the message our kids receive, is it the author of the book? The producers of the show? The school district? Or the Parents? How about when the kids take this behavior to social media, who’s responsible then? My take on the whole situation is that we all are. Remember that old saying it takes a village to raise a child? This particular example is what the quote is talking about.

Our responsibility as authors is to make sure our stories are authentic and our message is a positive one. I feel, even though I haven’t read the book yet, that when Jay Asher wrote the story, he was attempting to show what could happen to a teen who was experiencing these problems. So teens who were slut-shaming or bullying would know the consequences of their actions before it was too late. It was a cautionary tale. Kudos to the author for sending such a powerful message.

There are differences between the show and the book, mainly for dramatic effect. The show is much longer than the book and the reason is because the producers wanted to make thirteen episodes to make the mini-series a two week event. Because of this, they had to make changes to the story itself. The administrators at the school were concerned the show presented suicide as a viable option to solving the issues in the story, and again, the possibility of this show as a trigger for teens experiencing some of the issues.

Suicide is never an option. We need to communicate with our kids and tell them help is available. There are professionals who can help them deal with their strong emotions and there are authority figures who can step in if they’re being shamed in any way. This is where the school took responsibility and warned the parents. Now the responsibility falls on the parents to get involved and either watch or read the book with their child and have an open dialogue with them. Could the producers of the series have done a better job of showing how Hannah could’ve gotten help? Probably. And I feel they should have. I’ve heard the show presented suicide as a viable option and like I said before, suicide is never an option.

But what happens when the teens take this behavior to social media? Who’s the authority there? Is it the school’s responsibility to make sure students behave? In my opinion, social media is out of the school’s control. The school can’t police all their students’ social media accounts.

How about the parents. Yeah. I agree in a perfect world, the parents are responsible for their child’s behavior, but we all know our world is far from perfect, and most kids don’t tell their parents when they’re going through something like slut-shaming. So how do we nip this behavior in the bud before it reaches that critical point?

We need the creators of these social media sites to be vigilant and look for this type of behavior among their users. They’re the only ones who can do this. And they need to take a strong stance against this behavior. Accounts should be suspended or deleted as soon as bullying appears. I know they can’t catch everyone, but they may be able to save a life.

I know some students will be up in arms about privacy issues and freedom of speech. But social media has never been private and freedom of speech doesn’t apply to bullying. We as parents need to teach our kids this behavior is never okay. We have to make sure we don’t inadvertently model this behavior in our own lives as well. So ultimately, every single one of us is responsible and it really does take a village to raise a child.

Thanks for stopping by and reading my post. What are your thoughts? I’d love to read them, so leave a comment! I love hearing from you!