Hello everyone. I hope all is well with you. I’m back today and I’m excited to say that I’ve finished my story, except for the epilogue. I’m excited about this one. I think it’s my best work so far.

I’ve also been reading. Writing and reading seem to go hand in hand, don’t they? I stepped out of my comfort zone and picked a book that was recommended to me.  It’s non-fiction and it’s titled: “Detroit An American Autopsy” written by Charlie LeDuff.

It’s the true story about the rise and fall of one of the largest cities in the United States. It is the story of a corrupt political system and the fleecing of the American people and it’s happening in cities all across the country. This story is what’s wrong with America. The cover and blurb are below: 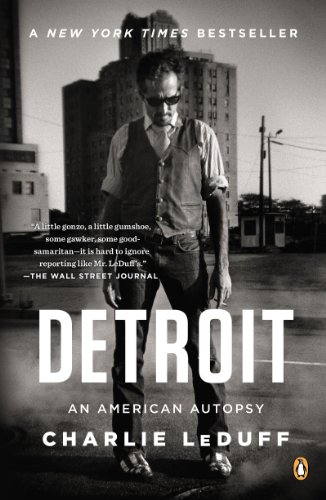 Back in his broken hometown, Pulitzer Prize-winning journalist Charlie LeDuff searches the ruins of Detroit for clues to his family’s troubled past. Having led us on the way up, Detroit now seems to be leading us on the way down. Once the richest city in America, Detroit is now the nation’s poorest. Once the vanguard of America’s machine age—mass-production, blue-collar jobs, and automobiles—Detroit is now America’s capital for unemployment, illiteracy, dropouts, and foreclosures. With the steel-eyed reportage that has become his trademark, and the righteous indignation only a native son possesses, LeDuff sets out to uncover what destroyed his city. He beats on the doors of union bosses and homeless squatters, powerful businessmen and struggling homeowners and the ordinary people holding the city together by sheer determination. Detroit: An American Autopsy is an unbelievable story of a hard town in a rough time filled with some of the strangest and strongest people our country has to offer.

Charlie LeDuff’s story exposes the greed and corruption behind not only our political system but our judicial system as well. It’s time the American people stepped up to the plate and did something about it because this is happening in cities all across our country. This story is an eye-opening read and I recommend it to anyone who wants to know the truth behind Detroit’s downfall.

7 thoughts on “Detroit: An American Autopsy: A Review”