Hello everyone. I hope all is well with you. I’ve been working on my book and it’s coming together. Finally! This one has taken me a while because I’m a perfectionist.  I’m excited about it and I love the characters and the story line. I feel it has a lot of potential and that’s all I’m going to say about that. 🙂

I’ve also been reading, and I’ve just finished a book recommended to me by our high school librarian. The title is “Black like Me” and the cover and blurb are below. 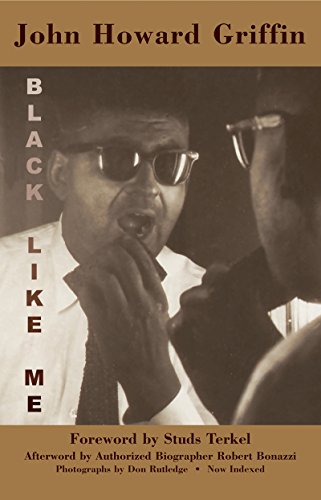 In the Deep South of the 1950s, journalist John Howard Griffin decided to cross the color line.  Using medication that darkened his skin to deep brown, he exchanged his privileged life as a Southern white man for the disenfranchised world of an unemployed black man.  His audacious, still chillingly relevant eyewitness history is a work about race and humanity-that in this new millennium still has something important to say to every American.

I was amazed by this story. This man, John Griffin, turned himself into a black man so he could experience what the Afro-Americans were going through. He wanted to understand.

It opened my eyes to how debilitating discrimination is. Not only for the black man, but for anyone who has been discriminated against. If I would’ve read this when I was younger, I don’t think it would’ve resonated so deeply with me.

I understood because I’ve experienced some of what John Griffin did, like I’m sure everyone has. Probably not to the intensity he did, but nonetheless it did strike a chord within me. The thing it made me realize is how damaging to the human spirit this kind of meanness is. It’s not something that can be brushed off. It eats away at you because you don’t understand this kind of hate.

I would recommend this book to teens and adults alike. It’s a sobering read. It’s even relevant in today’s world. The hate he experiences in the story is still alive today. It can be found on Social Media and at political rallies.

When I finished the story, I realized even though we have come a long way in dealing with discrimination, we still have a long way to go.

Thanks for stopping by my blog and checking out my post today. Do you have any great stories that you’d like to recommend? Leave a comment! I’d love to hear from you!