Hello Everyone! I hope all is well with you! I’ve got Liz Botts with us today and she’s sharing her new release A Family Name with us. Check it out! I’ve got it on my TBR List! 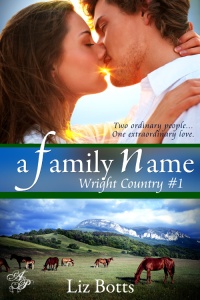 My new story, A Family Name, features a thirteen year old foster child who is desperately searching for her birth parents. Lexi has been bounced around foster care from the age of two. She yearns for stability and a family of her own.

While Lexi’s search does not yield the results she hopes for, she does learn what a real family feels like. Her relationship with her biological father is very sweet, almost childlike, in her acceptance of him in her life. I think they have a nice reciprocity in their father-daughter bond.

Lexi’s relationship with her biological mother is much more complicated. It was her mother who lost custody of her. When Lexi finally reunites with her, things do not go as expected. It’s hard for a thirteen year old to understand what motivated an adult to make the choices she made, especially when the adult was supposed to love the child unconditionally and forever. Lexi does struggle with the abandonment issues that naturally surround her birth mother’s decisions, but with the help of her foster mother and her dad, Lexi manages to make peace with parts of the situation.

Though the book is not about Lexi specifically, she plays a pivotal role in the action. Truly it is because of her search for her biological family that her forever family comes together. I had fun writing Lexi’s character because she is such a mixture of child and teen. She’s someone so desperate to seem grown up and tough on the outside so that no one will know how much she hurts on the inside. Her growth also happens so organically that it made creating her character pure joy.

Will moved to sit on the sofa beside Charlotte. He hovered a moment before easing himself onto a cushion at the opposite end. “What do you say to moving in here? You and Lexi. I’m sure the move will only be temporary. Just until I can get custody of Lexi, then you can go back to your own life.”

He watched as Charlotte clenched her jaw. He wondered what was going on in her head. Something told him to keep his mouth shut, which was proving far harder than he had ever imagined. Walker had always been more of the strong, silent type. Wyatt served in the role of family goofball. Will, on the other hand, had prided himself on being the serious one, the honest one, the shoot-from-the-hip one. Now he shut his mouth and decided to keep it shut until Charlotte answered him.

“That could take awhile.” Charlotte kept her eyes down, no matter how much he wished she would look up at him. “The courts can be so slow. I just don’t know how I feel about living here, just the three of us.”

“Sierra and Shane will be here too.”

The look on Charlotte’s face told him that he might have said the wrong thing. Or at the very least confused her. As he thought through the events of the past half hour it dawned on him why Charlotte’s brow was furrowed. In the shuffle of the news that he had a daughter Will had forgotten to mention his guardianship of Sierra and Shane.

Will took a deep breath. “My best friend and his wife named me temporary guardian of their children. They’ll be living with me until their grandparents come for them.”

He watched as Charlotte pinched lumps of stuffing under the fabric of the throw pillow. She had long, graceful fingers, but short, unpolished nails. Refined, yet practical. The paradox of this woman intrigued him, and Will found himself mentally shaking himself to bring the conversation at hand back into focus.

“They’re great kids. Sierra’s five, and Shane is three.” Will felt a knot of emotion rise up in his throat, and he stopped talking. This grief he felt was so out of character for Will, and while he knew it was fine to feel it, he couldn’t stop himself from being embarrassed. He certainly didn’t’ want Charlotte to see this weakness.

To his surprise, a moment later Charlotte’s hand curled over the top of one of his fists. She didn’t say anything, simply held on to him. The connection Will felt to this virtual stranger nearly overpowered him. When he looked up and their eyes met in a gaze that caught something deep inside Will, he let go of Charlotte’s hand like it was on fire. Grief was making him soft.

Silence settled over them as Will watched Charlotte. Her teeth caught at her bottom lip, and he could read her nervousness no matter how hard she was trying to hide it. Emulate Walker. That would be his new motto.

“I’d have to take a leave of absence from work, and I don’t think that’s even possible,” Charlotte continued after a few minutes. “And Lexi would have to leave her school. She just started there a few weeks ago. How would that make her feel?”

“We could ask her,” Will said, glad to hear his voice sounding even and like himself again.

“She’s thirteen and desperate for a relationship with her real parents. I can guarantee she’ll happily agree, but I can’t let her make this choice. She’s a child, and I’m still responsible for her well being.” Charlotte leaned back and crossed her arms.

“And I’m her father, so I think I should have some say in her well being.”

Charlotte laughed a short laugh. “You just found out that you are her father not even thirty minutes ago.”

“There’s no doubt in my mind that she’s mine,” Will said, knowing that he meant it. “I can see my family in her.”

“But how does that qualify you to make decisions for her so soon?”

Irritation rankled Will. Many retorts came to mind, but he bit them back instead only shrugging. “I’m her father. That’s all the qualification I need, in my mind anyway.”

The look Charlotte gave him actually made Will shiver. Her eyes narrowed, and her mouth became a line so thin it appeared to disappear into her face.

“So… I’m guessing this isn’t something you’re really considering?” Will felt defeated, and confused. Defeat wasn’t in his nature, but he couldn’t very well bully Charlotte into moving to the ranch. He’d feel guilty even if it did mean having his daughter there with him. Still there had to be a way.

Thanks Liz for being my guest today! 🙂

And thank you for stopping by my blog! I appreciate it. Please share your thoughts on Liz’s story I’m sure she liked to read them! 🙂