Hello Everyone! I hope all is well with you today! I’ve got my good friend and fellow Astraea Press author Lori Lapekes here and she’s answering a few questions for all of us!  Take it away Lori!

Most of my books are generally off-beat love stories, some with and some without a suspense plot. As “Secrets of Catalpa Hall” is based upon a real place we used to go to when my sisters and I were kids, (and it always seemed kind of magical and scary) the idea of a death under mysterious circumstances there was easy to believe and write about.

2.  Who is your favorite character you have written and why?

That would have to be Daniel LaMont, the musician in my upcoming novel “The Gingerbread Boy,” hopefully to be released this May. I used to LOVE to watch the David Copperfield magician specials on television years ago, and had a huge crush on him. I saw him live several times, and briefly met him, and he seemed very kind as well as mysterious and talented. When I pictured Daniel when writing the novel, I sort of pictured David Copperfield from 20 years ago. I think I still have a crush on my own character—so why I put him in such a bad situation in the novel… (he is struggling with a terrible illness) is a story explained at the end of the book. 😉

3.  Describe a typical writing day for you?

Usually a lot of editing and rewriting! I work full time, and for many years I was a single mother, so I wrote in spare moments sitting on the couch curled up with a pen and paper and usually a cat on my lap. I still write by hand, I don’t type well, never could, and have to hire someone to type my manuscripts. (If I was a great typist, I’d probably still write by hand, as I need the flow from the pen to the paper to create.) Typing to me is a ghastly chore…

4.  What are you reading at the moment?

I just got done reading Jurassic Park again, I always loved that book and the feel of the story gets me in the mood for what I’m writing now, a young adult fantasy novel. I also just re-read “1984”, as my daughter found it at a garage sale. How depressing, yet how great the world really isn’t that bad now. Probably because the book WAS published, and warned people…so books do matter!

5.   Who is your favorite author and why?

Oddly, I love to read the adventure novels by Douglas Preston and Lincoln Child.

Although I write love stories, and those are fulfilling and sort of healing for me, I love adventure!

6.   If you could invite 3 authors to dinner, who would they be and why?

Steven King. I have a feeling he is a lot more spiritual than many think, and I’d like to (casually) pick his brain to find out what he believes about God.

7.  Tell us something no one knows about you.

I am afraid of machines. Even computers and tablets! I’m not sure why, but I think it’s because I nearly lost my arm in a machine called the “muncher” years ago when I worked in a cookie factory, and have nightmares about it still. (Note: Windmill cookies were sometimes made when all kinds of cookies fell off of the line to the floor. They were scooped up and mixed with another recipe in “The Muncher” and made into Windmill Cookies. (At least they were in the shop I worked in— but it’s long gone now. Probably the Muncher grew up and ate it!

A young adult fantasy story I started several years ago and thought I lost after about 18 pages. When I moved last year, I found it again!! I now have the time and ambition to finish it. It’s fun! Tornadoes, dinosaurs, mysterious stinky shuffling boxes, all kinds of weirdness…

9.  If you could travel anywhere in the world, where would you go and why?

So many places to visit….so little vacation time—or cash.  Probably Australia. I love their accents!

10.   What are some of the things you enjoy when you’re not writing?

I love to walk and play with my German Shepherd Maddy. (My best furry friend.) I also love antiques and bargains, and go to flea markets and farm auctions whenever I get the chance to hopefully find that amazing million-dollar item I bought for only three dollars!

Thanks for stopping by today Lori! Below are a couple of her books along with the buy links if you want to check them out! 🙂 They’re on sale for $.99!

Keri has no idea who she really is anymore. Raised in the Midwest, where catching frogs and shovelling manure is common practice, then spending several adult years traveling the country and hob-nobbing with celebrities and the elite, Keri returns to her roots. She now lives in her sister`s basement, wondering just who she really is anymore. After a peculiar meeting with the Quinn cousins, Keith and Jeremy, Keri is determined to capture Keith`s attention. An actor, a tall, compelling man, elusive, even abrasive at times, Keith is particularly intriguing to a woman like Keri who is accustomed to capturing the heart of any man she`s ever wanted. Yet it was Jeremy, the humble cabinet-maker and owner of a misshapen dog named Scalawag, who leaped into a bon-fire to rescue a scrap of an old coat that had sentimental value for her. Following two episodes with the facial disorder, Bell`s Palsy, and after Jeremy has moved out of state, possibly to run from his heartbreak over her, Keri finally realizes not only who she really is??but who she needs to become. But is it too late? 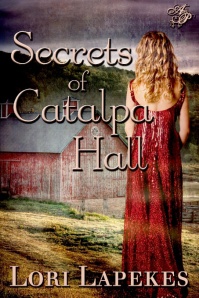 Melody Moon has returned to her roots with fame and riches in hopes of finding Gideon, the young man with the strange birthmark on his face. Thoughts of him have haunted her for twenty years, yet no one knows what happened to him. After purchasing Catalpa Hall, their childhood sanctuary, Melody makes an unusual discovery: carved in the wood below the old stage in the hall is her name, Gideon’s name, and the current year.Melody and Gideon were once known as the “Double Uglies,” dubbed as such by Melody’s reprehensible older brother, Dean. The cruel nickname later earned Melody fame as an author of children’s books, but only Gideon knows the nickname had actually precipitated dreadfully more—her brother’s drowning long ago. It’s a loss that’s turned Gideon into the recluse he’s
become.What exactly did happen at the secluded pond behind Catalpa Hall when Melody and Gideon were so young and just trying to get by in the backwoods culture…and who else may have witnessed it? Someone with sinister motives is involved, and is desperately attempting to tear Gideon and Melody apart. Gideon’s love for the enchanting young woman he’d been forced to abandon two decades ago may force him to leave her again, for he feels certain Melody could never understand the truth. At least–his perception of the truth.

****Sorry everyone! I don’t know why I can’t get the links to work! I’ve copied them over a couple of times! Grrrr….